I asked Tim for help, but he told us that festivals are difficult this time.

I asked Ozzy if there is another festival where we can go to? Like Germany?! We checked the dates and the Germany gigs were the best options but at the same time, not a very good option.

The first one is next Saturday (June 15th) already. We are available and the festival is not very expensive but it’s a long drive and they are on very late. And we have to be fit, for board games with my mum on the Sunday (June 16th). We will be playing “30 seconds“.

The 2nd gig is on the Friday in 2 weeks time (June 21st), not an option, we don’t have any days off anymore. The 3rd and last Germany gig is on the Sunday in 2 weeks time (June 23rd). It’s nearly 100,- for a ticket but the festival is not to far away and they are on, on a decent time, but my father-in-law is celebrating his birthday. I promised I would be there, and it’s important for my daughter and my hubby. We’d better not do this.

WE’RE GOING TO PUKKELPOP!!! Hopefully no storm this time. This happened last time at Pukkelpop.

I heard that I’m losing my job. I could get time off after all for the Friday (June 21st), but Ozzy couldn’t but we’re going to “Pukkel pop pop pop” now. It’s a lot closer to home as well.

Yesterday we went to Lowlands, today we go to “Pukkel pop pop pop”.

I woke up at 6:30. I didn’t sleep very well. I had a migraine. Roos stayed with me last night, she moved a lot and kicked me a lot, Horrific night. I might close my eyes in the car, if Ozzy doesn’t mind.

At 10ish I dropped Roos of at my mums. Roos will stay there until Monday. Then I bought a new rucksack for Mark and a mattress for Ozzy’s bed in his Streets room (our spare bedroom). When I got home, we made Ozzy’s bed with the new mattress, we brushed our teeth and we left at 11:30 towards “Pukkel pop pop pop”.

It would take us about 2.5 hours but when we were nearly there we decided to have a quick stop at Maccy D. For the toilet and a lunch. (We had table service at Mac Donalds) 🙀 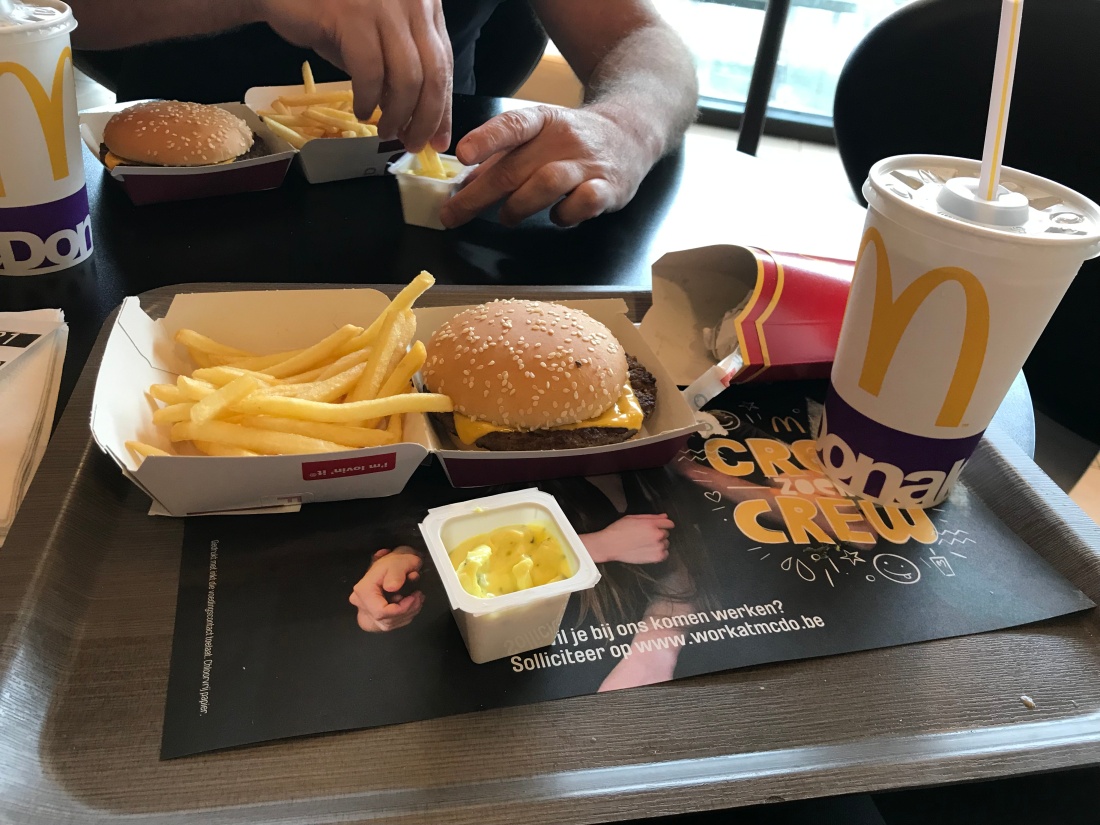 When we finished that, it was only 10 minutes to go, but… we needed to find a parking place. That took us about an hour!! But luckily this wasn’t too far from the festival. 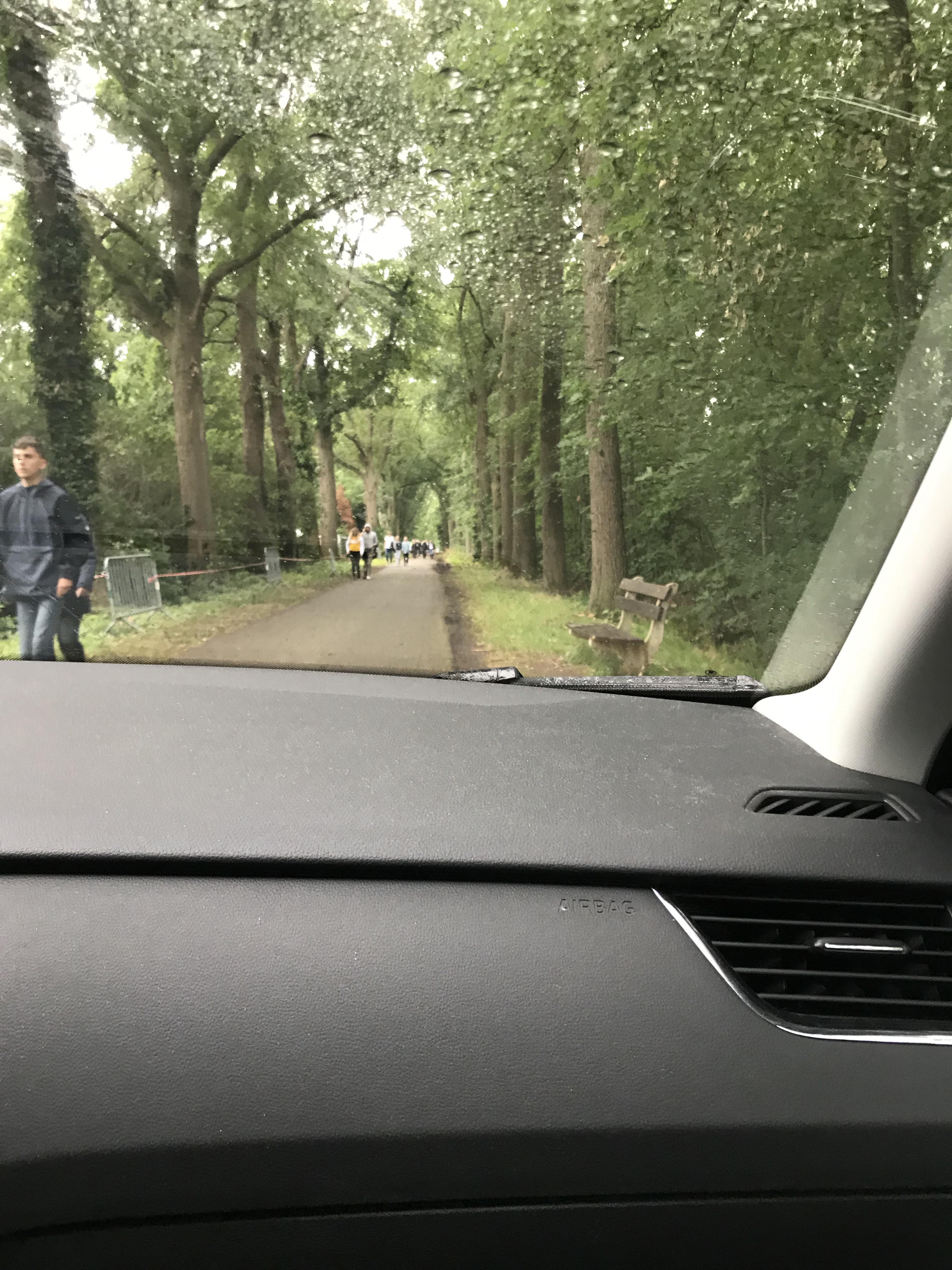 We had to check in first to get our wristband. Then we could go through the entrance.

I texted Wayne that we had arrived.

It was nearly time for De Jeugd van tegenwoordig. They are Dutch, I wanted to see them. 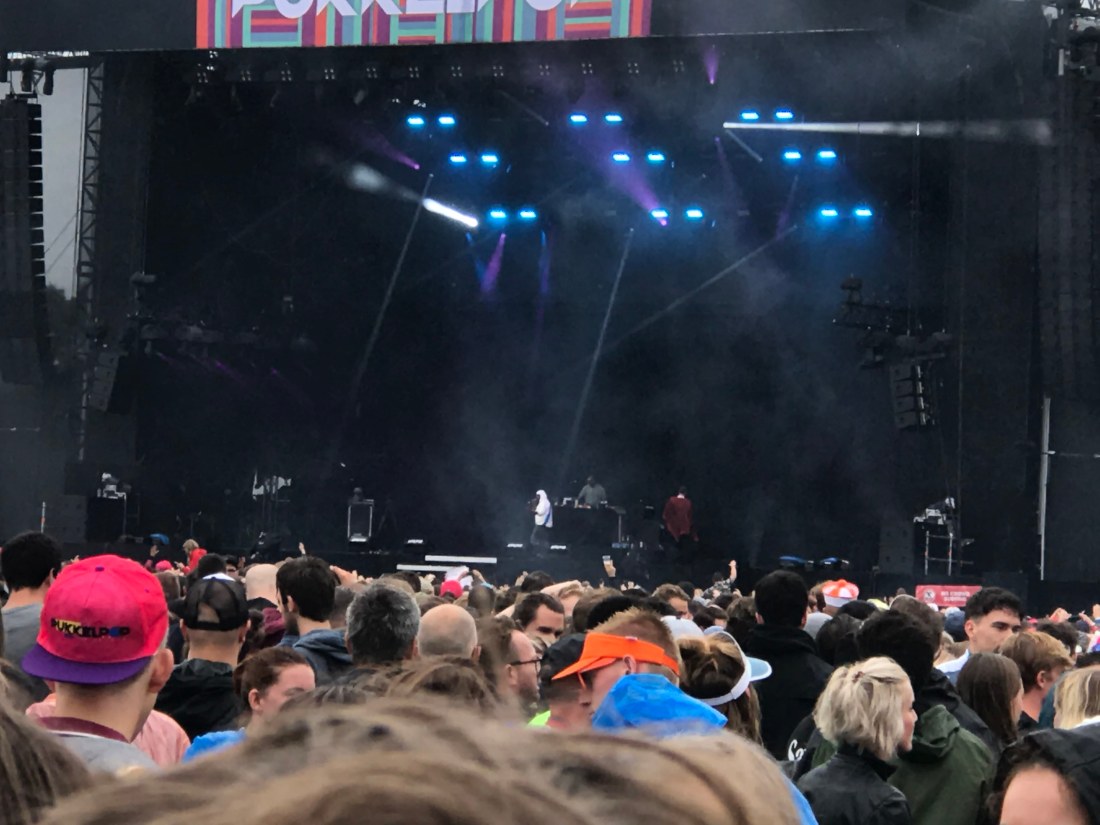 My foot hurts a lot, I have a blister. I decided to go to the first aid to get a plaster. There was a guy, he looked much worse, some big guy jumped on his foot. After I got the plaster it was all good.

I wanted to see more of De Jeugd van tegenwoordig, so we sat on the stand in the Lift tent. We could watch the stage from there.

In the meantime I got a message from Virina. She asked if I was there yet. I let her know where we were.

When she found us we needed something to drink. And we left to the Marquee tent for Mike D. He is from the Beastie Boys and doing a DJ set. 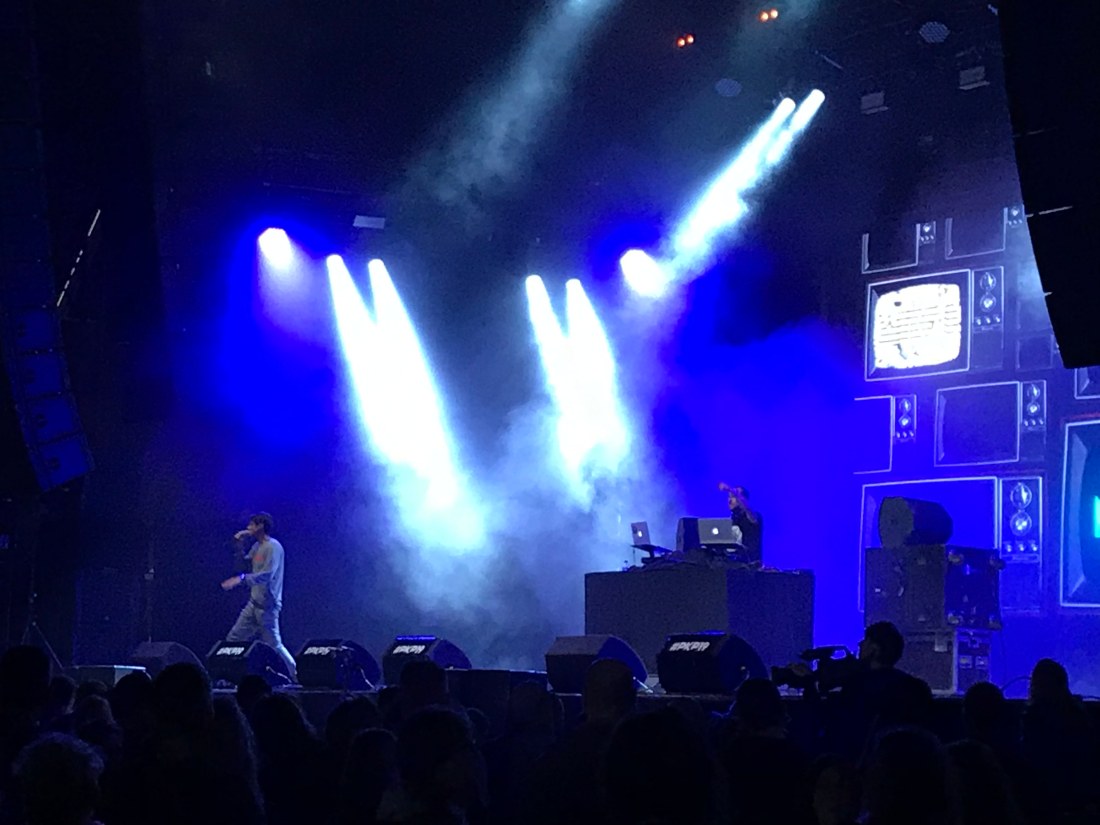 We left the tent but we went back inside soon, hiding for the rain.

When Mike D finished his set we left to “Food Wood” we had some “poffertjes“. Virina was getting some food for herself. “Text me when you’re ready” I said and she left.

Then I received a message from Wayne that he’s going for a walk. He would come and find me but Ozzy and I tried to find him instead. He sent me his live location.

We were on the other side of the festival, but it was quite some walk 🙈 but we found them. Kevin was there as well.

They wanted a waffle, and Wayne wanted ice cream as well. He shared his ice cream with me. Thank you!!!

We were watching Gossip. They picked someone from the audience to sing with them. Omg that was so good! That was amazing!! 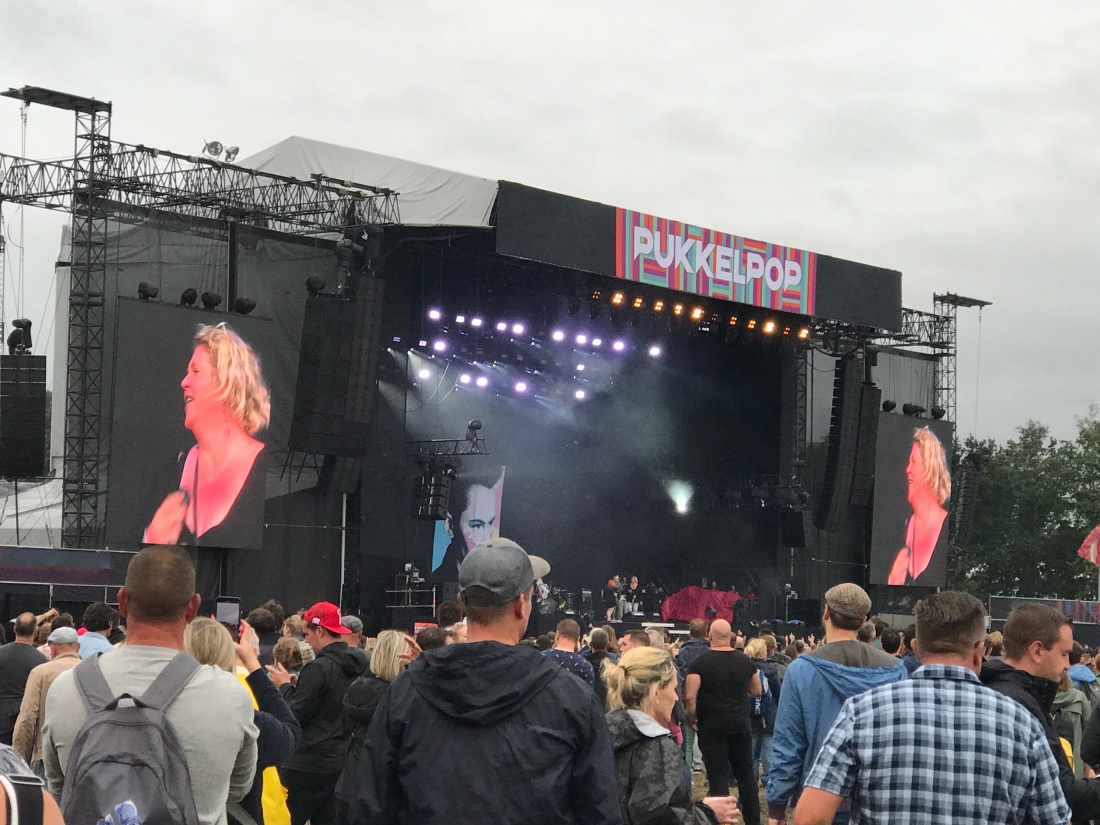 Wayne and Kevin would like to watch Jorja Smith, and asked if we wanted to join them yeah sure, haven’t heard of her before but we’d like to. 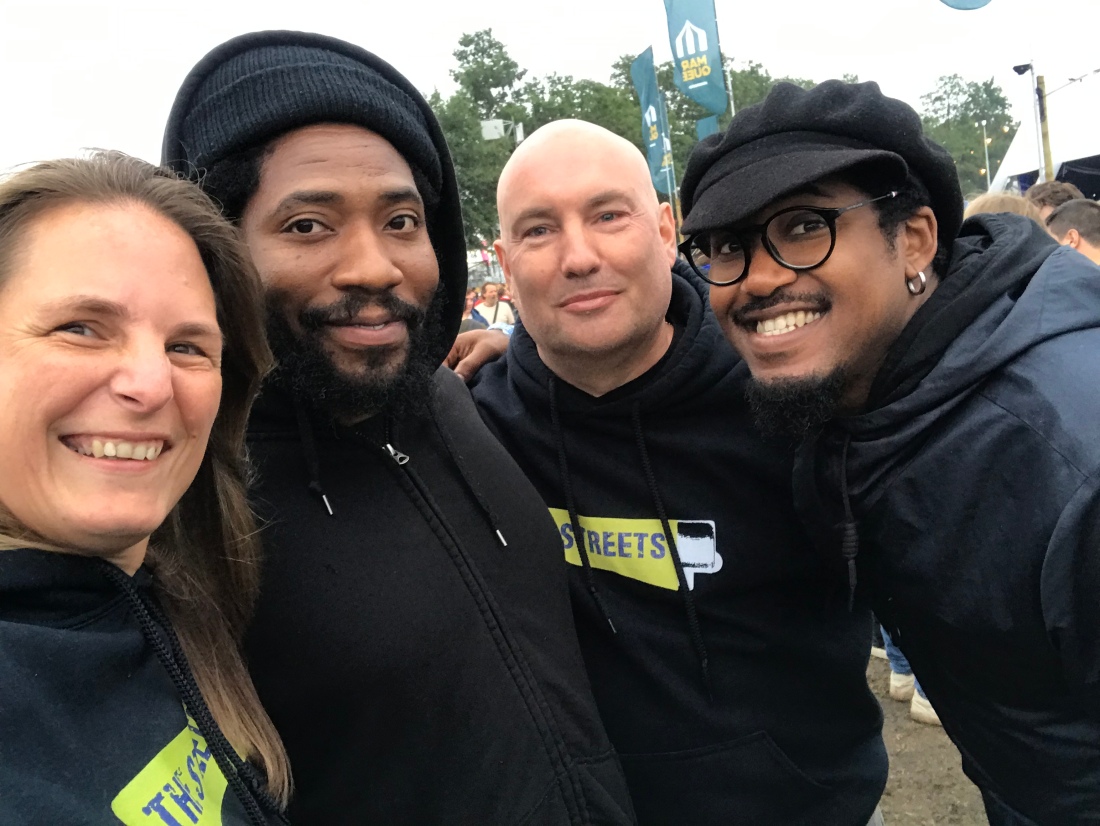 After a while they left, we got some more food. This time we had pizza. I text Virina, she was enjoying herself. We will see her later. We went to see Chase & Status in the Dance Hall. Also a DJ set. We couldn’t stay too long because we wanted to be up front for The Streets. The Boiler room looked really good. There was a big dance party going on!! 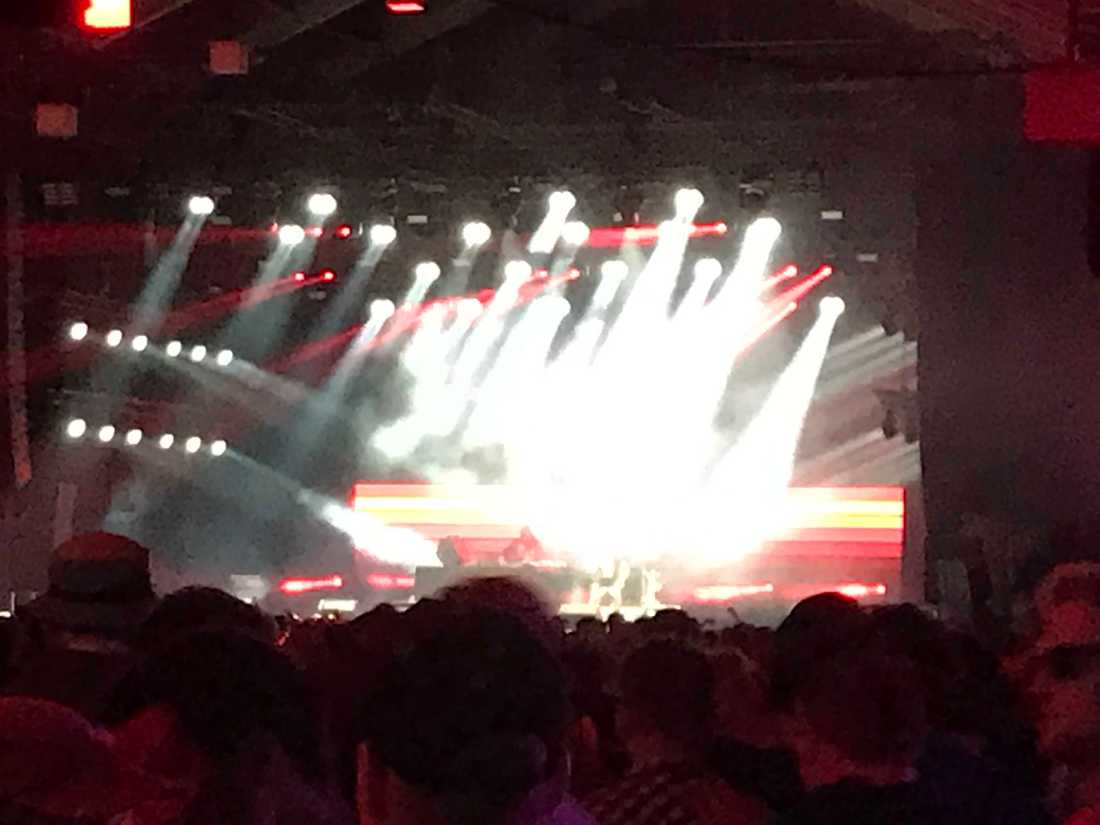 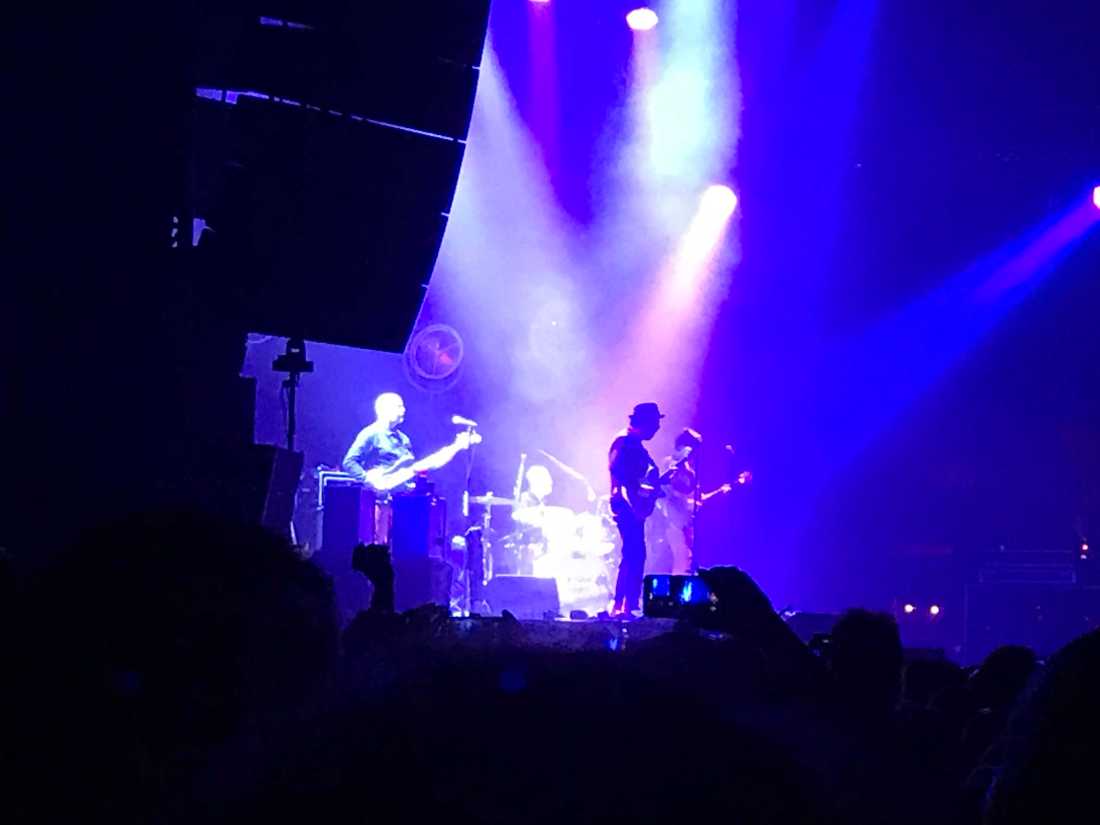 When Eels finished we were pretty close to the fence already, we needed to be quick, we weren’t the only one aiming for that spot. We managed to get to the front.

We needed to wait for an hour. Virina found us as well. Then it’s time for The Streets. They start at 23:30. 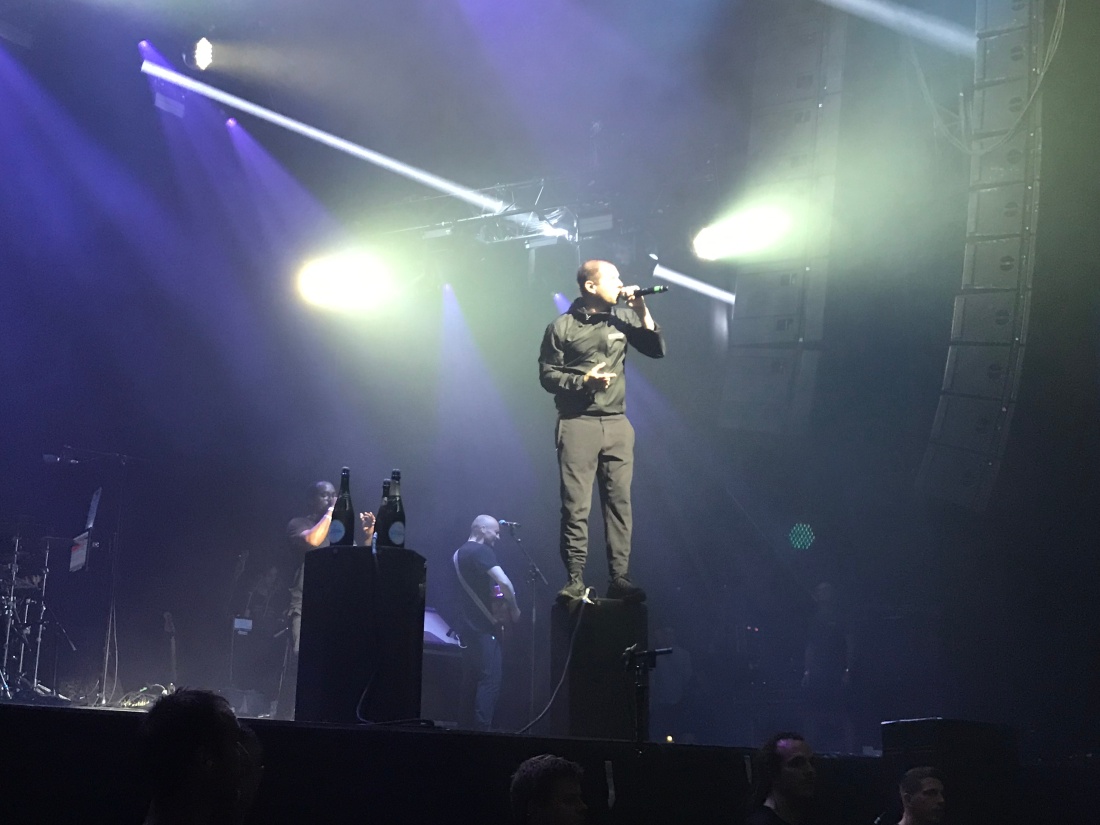 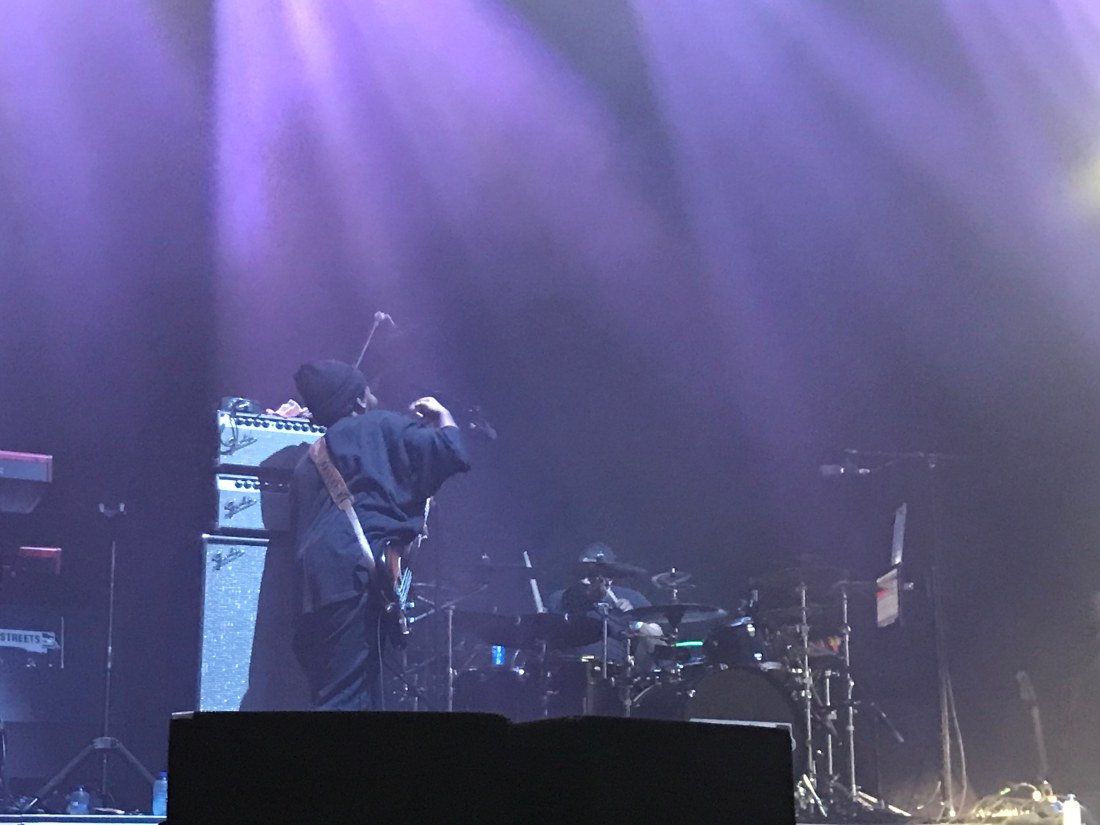 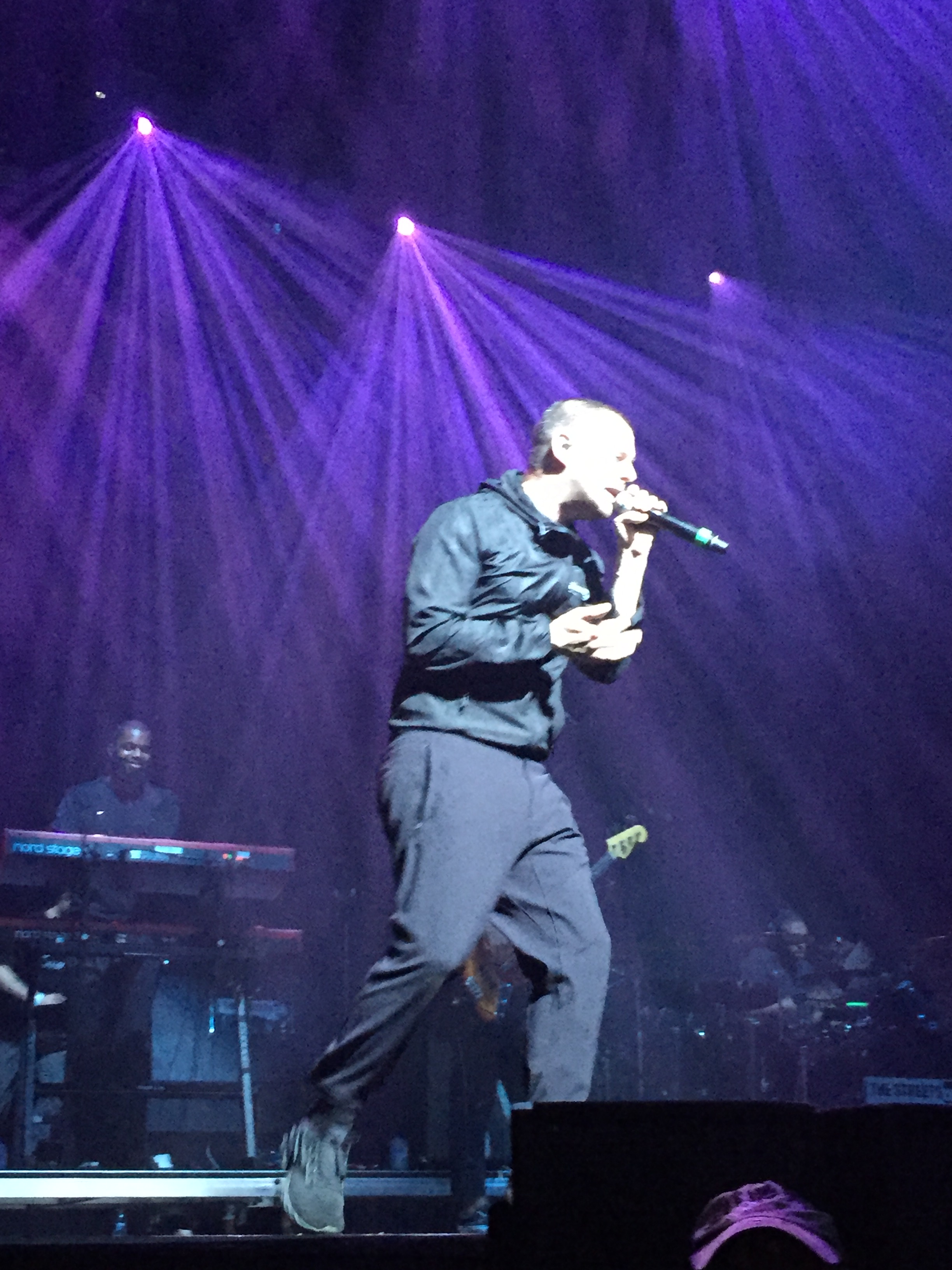 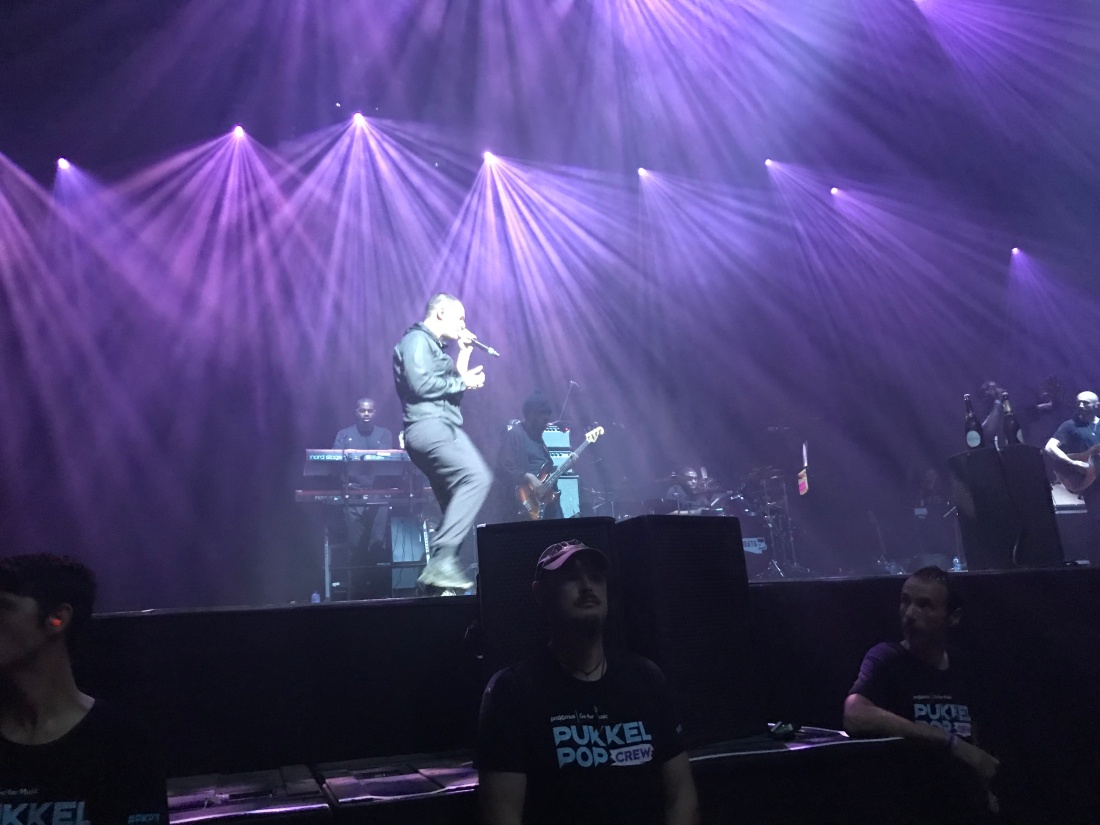 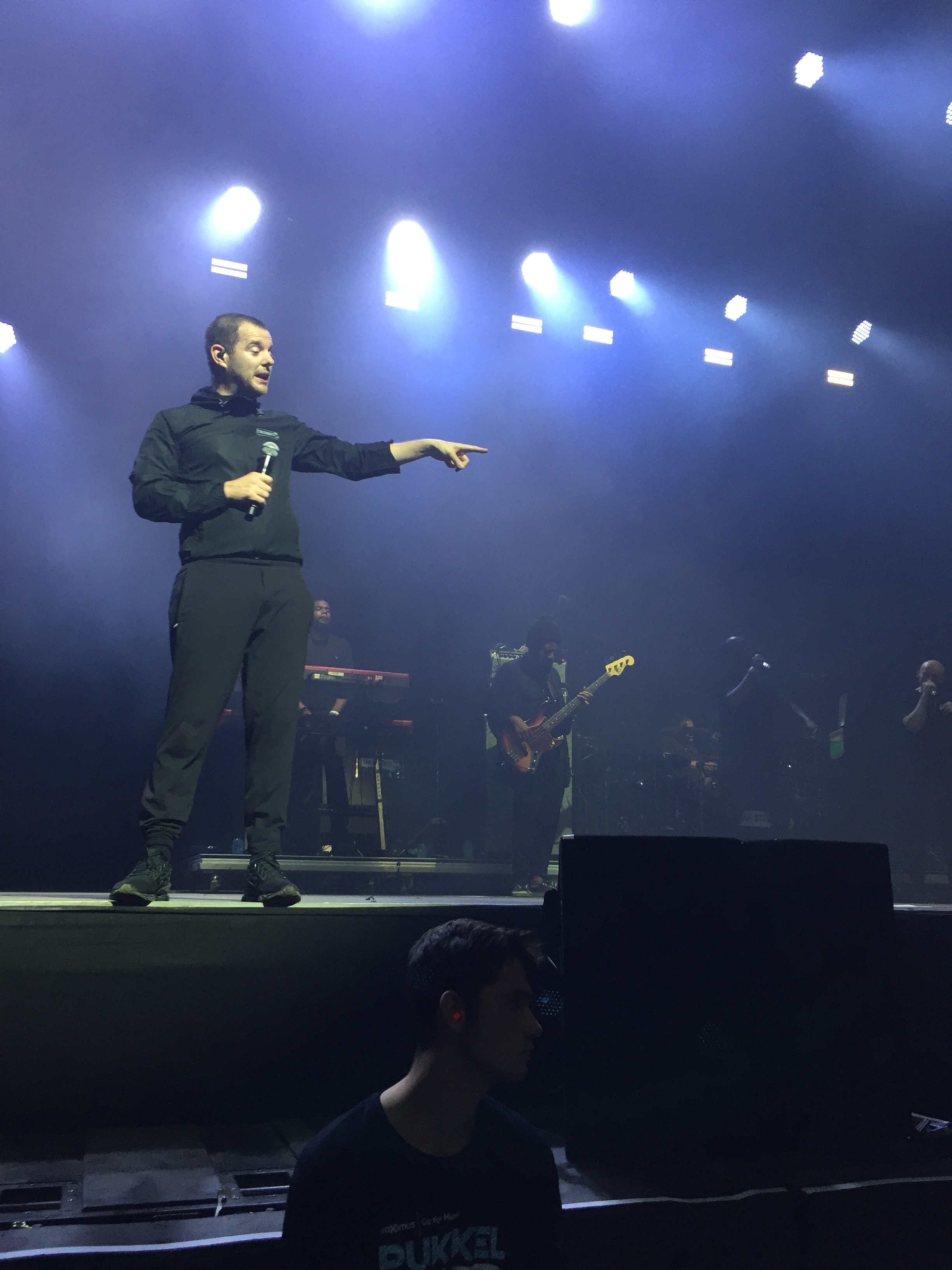 OMG what a performance!! Well done Skinner!! And what a crowd surf!! So proud of you!!!

I got the playlist from a crew member of the festival 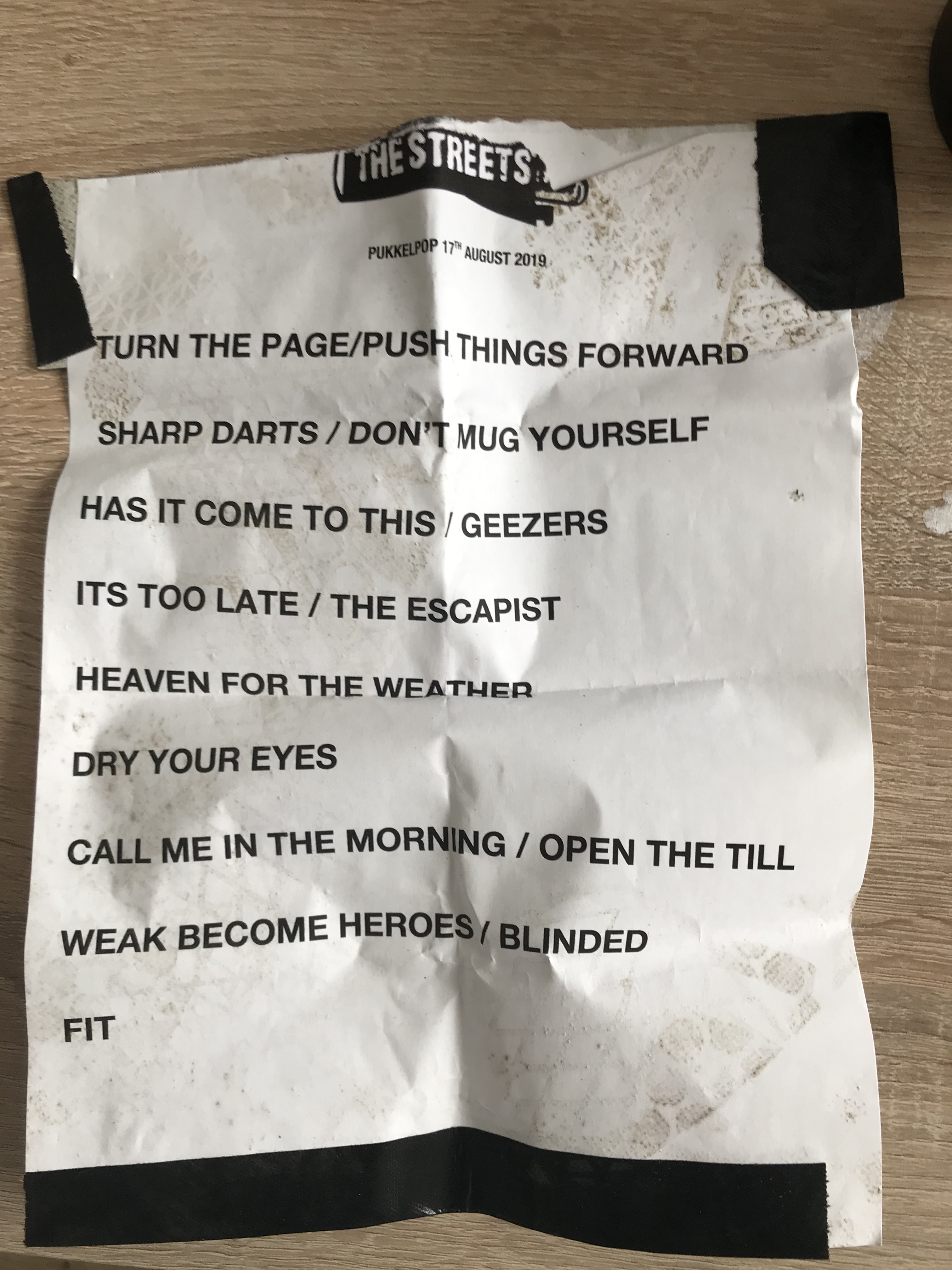 After the gig Wayne came over to say goodbye. They are leaving at 3am. And it’s raining outside. They are all going to chill. So nice of him to come and say goodbye. He doesn’t need to. Love you man!! We also got kicked out of the tent. Wayne nearly couldn’t get back inside, backstage but after convincing the crew that he was on stage, just a minute ago, they let him through.

We got dressed for the rain and got something to drink. Then we said goodbye to Virina. Then we visited the toilet and then it was time to leave.

It was quite a walk. My sole of my shoe was loose, it was a struggle to walk. I left the shoes on the parking. Luckily I had extra shoes with me.

According to google maps we’ll be home around 4am. I fell asleep and woke up when we were nearly home.

I finished my blog, while we had some crisps and Radler. Then it’s time for bed. It’s 6am now.

It’s 1pm now, Ozzy is still asleep, obviously he needs some sleep after 2 gigs in a row, but he also has a new mattress, he must be sleeping like a little baby. 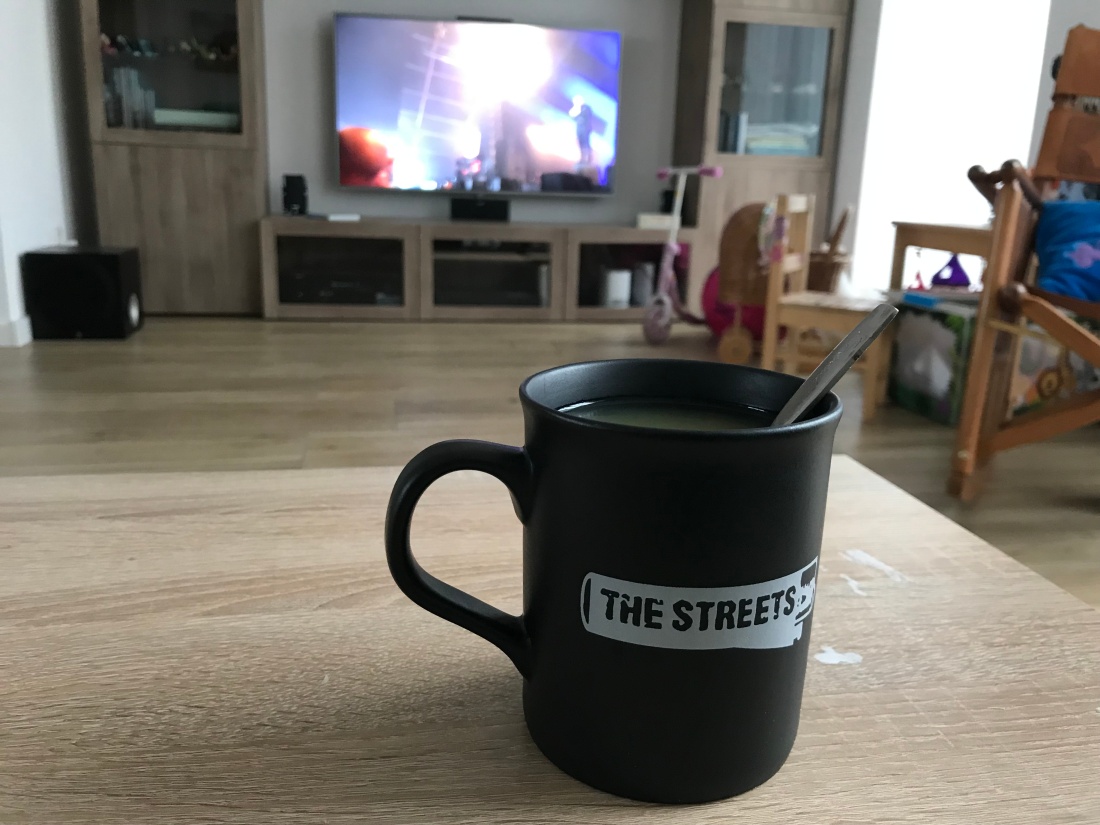 Thanks for another amazing gig guys!!! Unfortunately it’s all over (for now). Hopefully see you soon!!!

(The whole gig filmed by Pukkel pop pop pop itself).